We arrived at the airport around 5 AM on Tuesday and didn’t touch Koh Tao until Thursday afternoon (local time). We spent a good 30+ hours in transit and it was as awful as it sounds, unfortunately. If you don’t book business class tickets, you can expect to be completely drained after you land at your destination (especially if you also have to deal with jetlag on top of everything).

But to try to make our traveling time as smooth as possible, I went on an Amazon shopping spree and bought a bunch of stuff I thought might help.

And because I’ve done the experiment, I thought you’d also enjoy knowing the results!

What I decided to test 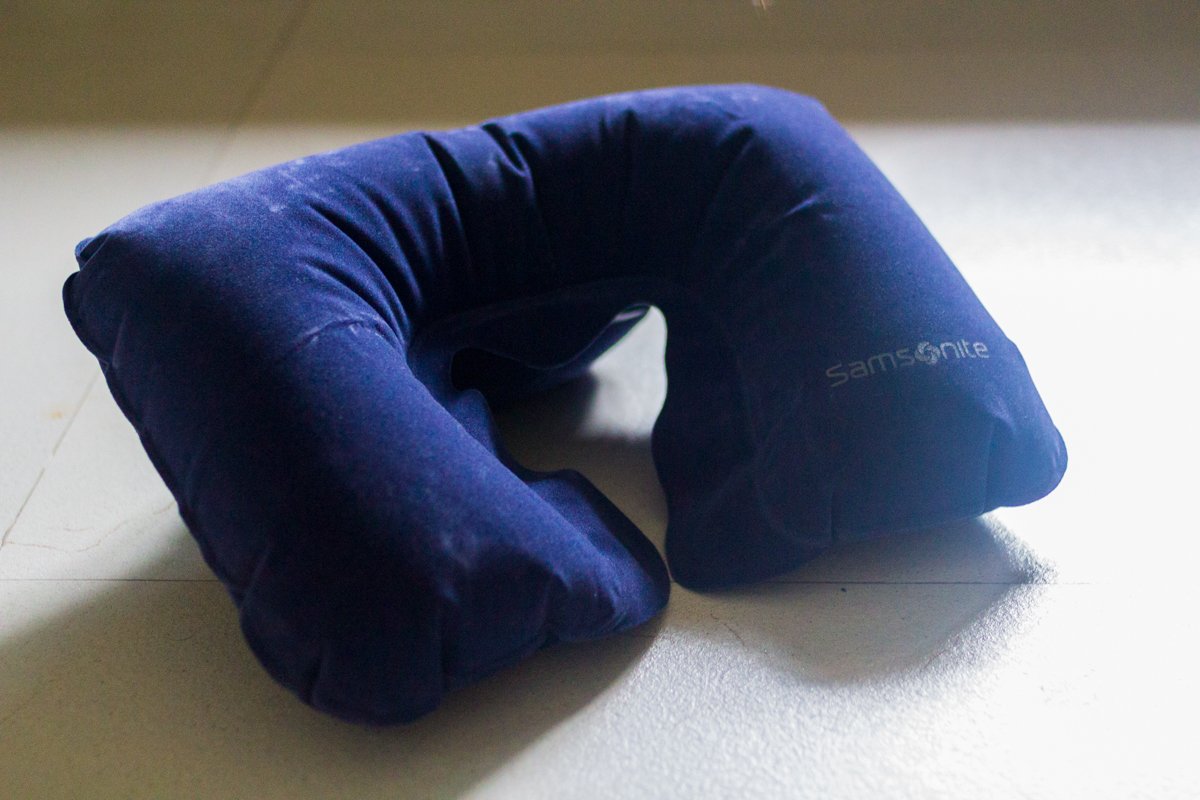 Nay for the inflatable kind. The one I bought (Samsonite Neck Pillow) was not very comfortable and too bulky for my neck. I wasn’t able to find a comfortable position with it.

BUT! I know that the non-inflatable kind (like the ones with beads or foam inside) can be godsent! I was trying to save luggage space by being able to inflate/deflate our neck pillows, but it failed. Next time I’d invest in a real neck pillow instead, even though it would be bulky and annoying to carry. 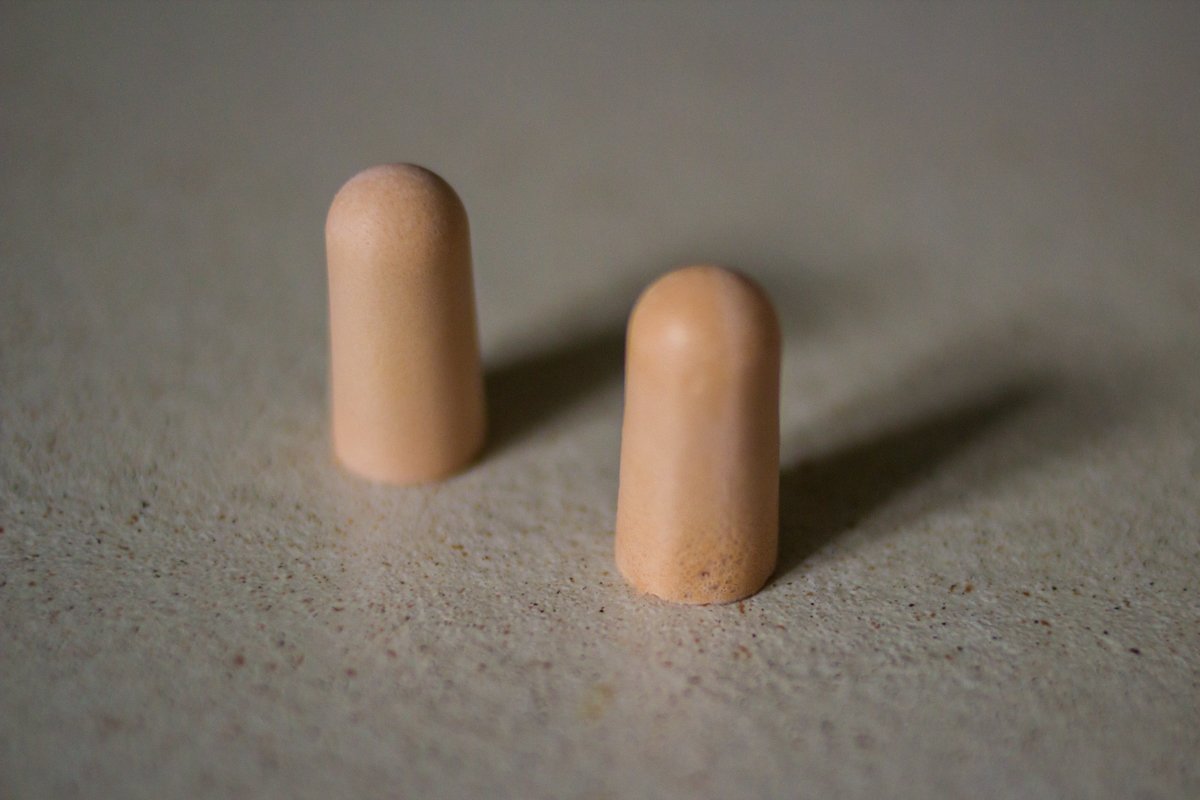 A big “HELL YEAH” for this one! I don’t know how I would get through so many hours of flying without earplugs! I used to be a little scared of losing them in my ear so I never really wore any until maybe three or four years ago. Now, they’re my life saver when Chris snores, haha!

But on the plane, it helps cut out all the small noises you don’t realize are annoying until you put your earplugs in. And if the person next to you is blasting music in their headphones, you can still relax and enjoy your sleep!

I did my research though before buying earplugs as I know they’re not all created equals. Get cheap earplugs and you won’t even notice a difference. You also want to make sure they fit your ear properly so you don’t have to remove them after half an hour because they’re too big. I ended up buying those Hearos earplugs and they’re the best ones we’ve been able to find so far! There are still some noises that they don’t block (especially the low-pitch ones, like faraway music or snoring) but it does a good job for the rest! 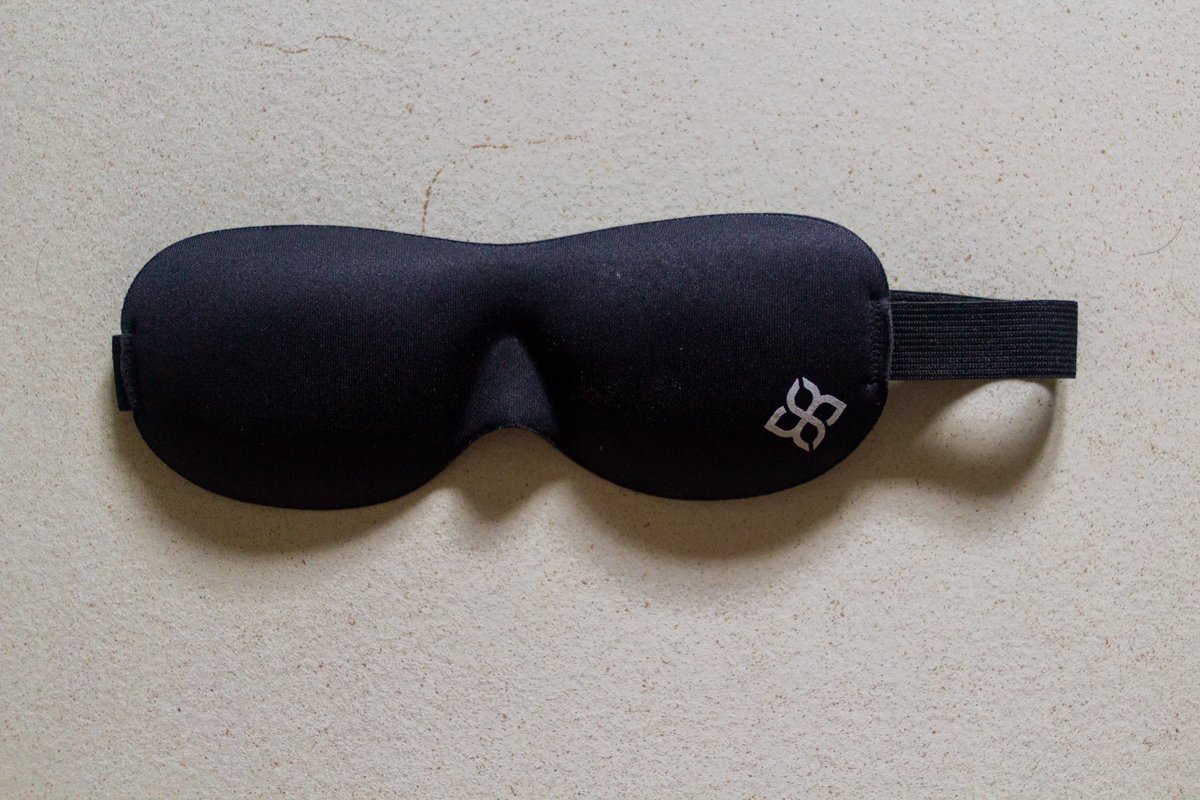 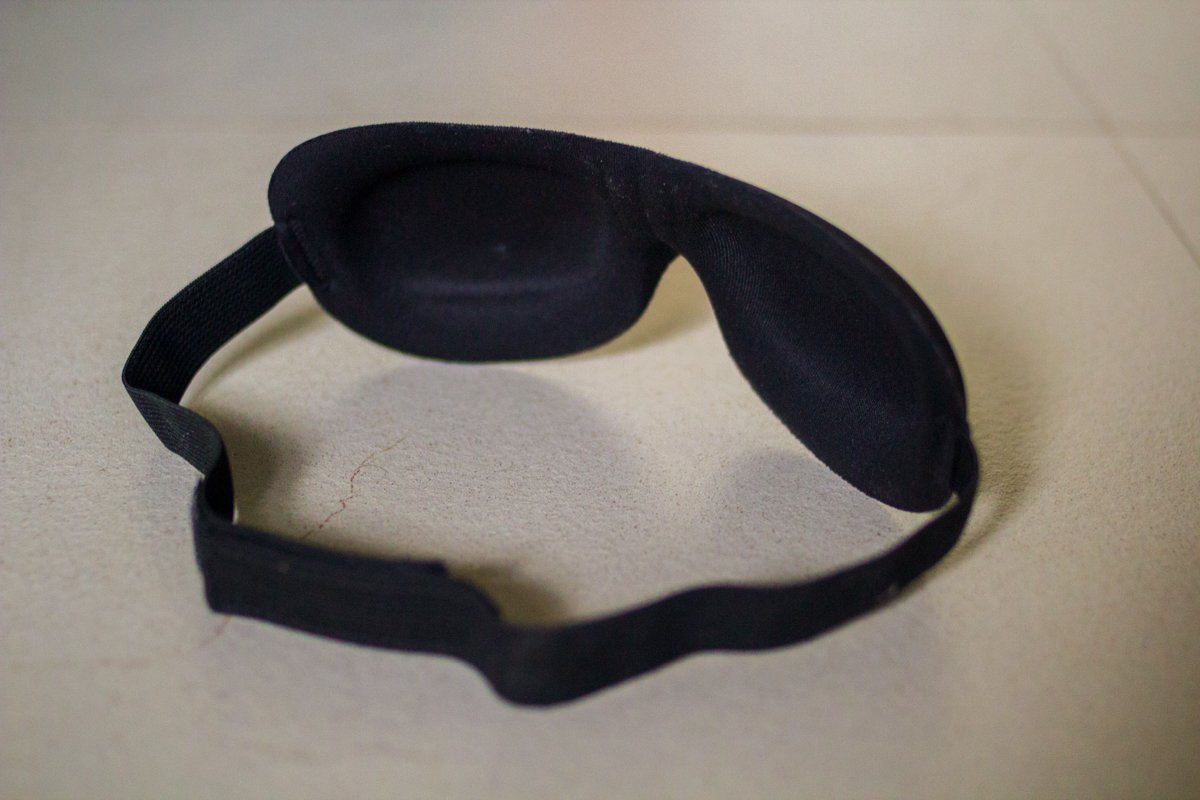 This is something I knew we wouldn’t only use on the plane, so I decided to try it out! Chris already had a habit of putting a dark shirt on his face every morning to keep sleeping while there was some light in the room, so I knew he’d use the mask! As long as it was comfortable, I guess… So I read reviews and looked at a bunch of eye masks before deciding on the Bedtime Bliss ones.

The cool thing about this eye mask is that it doesn’t put any pressure on your eyes. It’s got a little air pocket on your eyes and the pressure is on the rest of your face, which makes it a lot more comfortable! The strap on the back is a little annoying sometimes, but the minute you fall asleep it’s all good! One more thing too is that there’s always a little stream of light that comes in from around the nose and I haven’t found a way to get rid of that. I got used to it, but it you need total darkness even when your eyes are open, you might have to figure something out! (But when you close your eyes it doesn’t really bother at all in my opinion!)

I love it and use it all the time, whether it’s on an airplane to take a nap or when Chris doesn’t come to bed at the same time as me and still wants a light on.

So Yay for that one too! 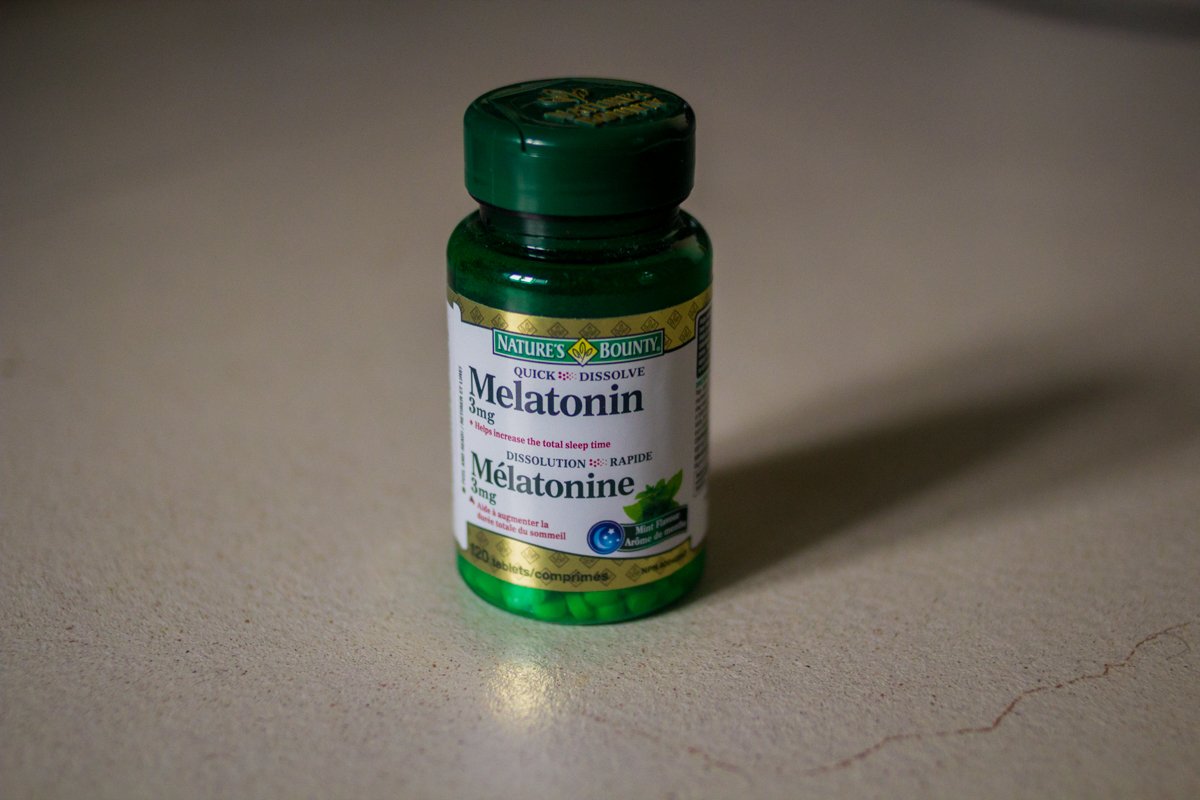 This is the last product that I decided to try on that long flight. I knew we’d be having a hard time falling asleep and the jetlag might get bad. I read a bit about melatonin and it sounded like a great answer to our sleep problems, but… I don’t think it worked. I’m not sure if it’s because we only got the 3mg version (there is a 5mg version too) or if it just doesn’t work in general, but the night I tried it I ended up being more awake than normal! (I tried it the night before our flight to help me sleep and hopefully feel more awake on the flight). Since it just kept me awake until waaaaay too long, I decided not to try it on the fligh itself. Chris did though, but again it didn’t do anything to him.

I might give it another try in the future, but so far it hasn’t worked for us!

What do I always take with me?

Even though these are just what I tried, there’s still a lot of stuff that I always take with me!

This is super important since the temperature from an airplane to the airport to another airplane can vary a lot! I’m usually more cold than hot, so I put on a t-shirt and bring a light sweater and a jacket. If I’m still cold, I’ll usually still Chris’! But I’m always taking my sweater on and off, so unless you know your body handles temperature changes very well, bring an extra layer!

Bring your own water bottle

Most airports around the world have fountains that you can drink out of. So as long as you drink all your water before going through security, you can take it with you to the other side and refill it as many times as you want! This’ll save you money and from using too much plastic! Airport stuff is always super expensive (they know you can’t go anywhere else, so why not sell that apple for $3?) so you can keep your money in your pocket!

Have some entertainment ready

Going on a 10 hours flight without a bunch of playlists and a couple of books ready is mental suicide. Planes usually have some movies you can stream, but they might not be that interesting… So make sure you have something you know will takes your mind off of your loud neighbor! Otherwise, 10 hours is a loooooong time to be bored!

Chris and I have Spotify Premium so we download a bunch of playlist before leaving and I fill my ebook with romance books and some business non-fiction. That keeps me occupied for a while if I can’t sleep!

Also, if you like playing games on your phone, make sure you’re able to play them offline (a lot of them you can!). And bring a power bank if your phone tends to die rather quickly, just in case there aren’t any plugs on the airplane!

To me, that means having a ziploc bags full of kleenexes, a mix of over-the-counter medicine, hand sanitizer, deodorant, lotion, etc. All those things that will make your flight a lot more comfortable and that you can use at any times. I’ve been to too many bathrooms without toilet paper (hence the load on kleenexes), had too many colds on the plane which make you feel like your sinuses are going to explore (hence the over-the-counter medicine), had too much dry skin and nose (hence the lotion). You get smarter the more often you fly, but these are a few of my essentials! I don’t always need them, but at least I have them!

I also generally bring a snack in case we don’t have time to eat during a layover. If you’ve got less than an hour between two flights, it’s safe to say you won’t be able to buy something. So bring your own food! Dry fruits and nuts work great in that case. Make sure they’re okay in the country you go in though, as the United States took our two oranges that we brought from Canada 🙁 (I was super looking forward to those but they just threw them in the garbage, even though we weren’t even going to leave the airport!)

I hope this helps you pack for your next long-haul trip! Making yourself as comfortable as possible is really the only way to survive those 10/15 hours of straight flying! We can’t all afford business class, so we gotta do what we can… 😉